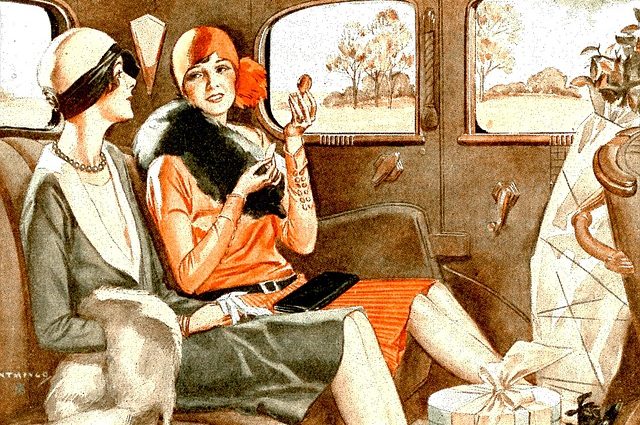 “She watched the hulk of marriage drifting down on her frail speed-boat of aspiration, and steered in desperate circles.” ― Sinclair Lewis, Free Air

Free Air was such a pleasant surprise. In fact, it was a breath of fresh country air. As a reader, from the first page I felt like I too was driving a vintage car — one from 1919, when the novel was set, and tackling the winding and rough roads on the way to Seattle. The story focuses on the female protagonist, Claire Boltwood, a socialite from Brooklyn, who is tired of New York’s elite, and all the tea parties and luxuries begin to suffocate her, hence she hits the road. Together with her father, a well-to-do business man, she begins her adventure behind the wheel. From the onset, the reader senses what a rebellious thing this is for a woman to be doing in that particular era. We also see that her father knows nothing about driving a car, and being outside his comfort zone, lets his daughter take the reins.

I could practically feel the winding streets as they drove. They ate eggs by the campfire, coffee that wasn’t too good, and felt awkward as they met people from different towns who weren’t used to seeing elite New Yorkers. It was quite an adventure as a reader, as I didn’t know what interesting characters they would meet next. One such character is the leading man, Milt Daggett, a car mechanic who lives in a remote town and owns a car repair business, and is respected in the town because most people, apart from the professor and his wife, don’t aspire for much in life — they have no dreams of their own. Running into Claire rekindles a hidden desire — and he realises that he is different to others in the sleepy town where he resides. Milt does have dreams to evolve — to better himself as a person. On a whim, he too heads for Seattle after helping the Boltwoods get out of many sticky situations during their driving adventure.

After many unexpected meetings between the Boltwoods and Milt Daggett, the story completely changes direction — it no longer focuses on the open road. This took me completely by surprise, and I began to appreciate the novel even more. I was highly impressed with the author’s deep insight into complex human emotions. He masterfully tapped into human desperation, human vulnerabilities and inner desire — yearning for something more in life. I could feel Claire’s desire to integrate various aspects of her personality. We see her come alive amongst the free air, roughing it behind the wheel, eating mediocre meals, and sleeping in places that were a vast contrast to the luxurious, pampered life-style she was accustomed to. Milt yearns to become educated and to be able to exchange intelligent conversation with Claire and her circle of friends. Thus, the journey on the road becomes a personal one for the main characters; for each to get in touch with their true self — to move forward and explore different directions within their life, and within themselves as individuals. This was definitely not “just a love story”. There is great substance and depth in this novel. There is also clever wit and intelligent insight into the nature of people. I could feel the needs of the characters and their confusion when it came to following their dreams — the uncertainty regarding how they will attain their goals, or rather, if they can attain them.

It was also interesting to get a glimpse of how people at the time would have felt about driving a car. Not many people owned one and the reader can feel the excitement and thrill when they drove. It was also interesting to see that there were many stereotypes and prejudices regarding certain minorities but that simply reflects how things were back then, and the characters reflect society of the time — how they saw different people that had migrated from other countries, and how the upper and lower classes regarded each other. Similarly, the expectations that society placed on females is also evident.

Overall, I enjoyed reading this novel immensely. The author had a gift for seeing different complexities within humans, and I feel that this novel is a love story with a “finding yourself” theme. A well-written romance, for me, cannot separate the two, as a true love story deals with deep, human, complex emotions and brings other elements into it, such as the expectations of others and the struggle the characters are faced with to hold onto their instincts and not be swayed. It may seem light-hearted, but if you look deeper into the underlying messages, it becomes clearer that the novel has genuine feeling seeping through the pages. I am actually sad to say goodbye to the characters and to the era the novel was set in. This was a wonderful ride but even drives on the open road have to end, even if we want them to go on indefinitely, as we may run the risk that we may stop and settle to a life that is more ordinary than extraordinary.